A more modestly-sized touring squad than usual left the UK for Amsterdam in late-July. Eight ECC regulars were joined by old friends Len & Tim Ozanne and debutant Jamie Coombes. The party was completed by Vinny Khunger, who generously flew over for one match. Thanks to a willingness (in several cases a desire) to play as much cricket as possible, and to Vinny’s timely contribution, our usual four-match itinerary was completed with some success and with much enjoyment.

The week began at picturesque Bloemendaal CC, whose over-eager selection committee provided so many locals keen for a game that we played twelve-a-side. Jamie Coombes (56) and Robert Shenkman (61) provided the structure to ECC’s innings of 192-7 declared, with several useful contributions including Tim Ozanne (17) and Rob Chinneck (14). Tight early bowling kept the hosts honest but a lack of wickets meant that they were able to chase down an increasing run-rate with confidence. Tim (2-36) was the pick of the ECC bowlers as Bloemendaal reached their target with four wickets and four balls to spare. 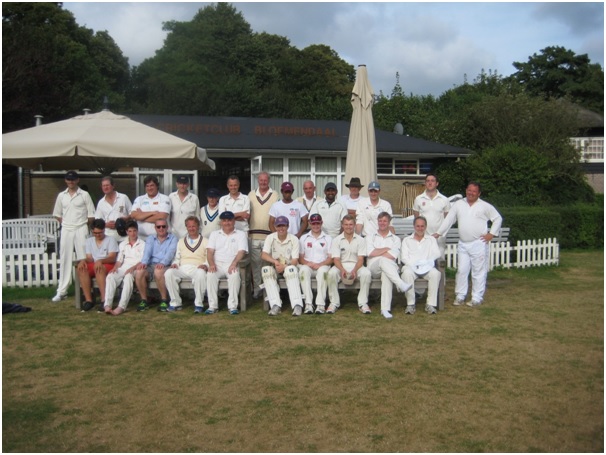 On Tuesday we took the short bus ride to VRA where we were relegated to the no less attractive 2nd field by Italy playing Denmark in an ICC Under-19 World Cup qualifying event on field 1. Our hosts’ young captain was flummoxed by the concept of timed cricket and so we agreed to play 40 overs per side. Our top-order struggled against a strong pace attack, reaching just 46 for 4 after 16 overs. Ollie Williams (51) and a second consecutive fifty from Robert (68) then added a splendid 124 in 23 overs; ECC finished on 178-7. The VRA number 3 was a new face to us. He had arrived suspiciously (an ungenerous mind might think) after a teatime phone call from their captain. This chap was clearly a strong batsman used to playing at a high level. He demolished our bowling, scoring 122 not out from the 130 or so runs required when he came to the crease. And off just 76 balls! So dominant was this chap that number 4 scored just 3 of the pair’s unbeaten 3rd wicket partnership of 90. Skipper Andy finished proceedings with a height no-ball which was clubbed for six; Andy thus finishing with bowling figures of 0.0-0-7-0. VRA won by 8 wickets with 15 overs to spare.

Wednesday brought our longest trip of the week, to Hilversum. This was our 3rd visit to Hilversum, though only long-term tourists will recall our previous visits. With cloud overhead and rain forecast a shortened format of 35 overs per side was agreed. Sam Baker (3-20) led the way in an impressive ECC bowling display, though a late flurry of runs took Hilversum to a very respectable 173-9. Rain led to an extended tea break until conditions allowed us to restart. Vinny was triggered lbw by his captain for just 2, much to the consternation of his teammates. However, Vinny was able to contribute further to the cause by acting as ‘tent pole’ for the tarpaulin sheet keeping the rain off our gear and, more importantly, scorer David and the book as the rain turned incessant for the remainder of the innings. Jamie (56) and Tim (31) added 70 for the 2nd wicket and, despite a brief flurry of wickets, Robert (26) and Ollie (14 not out) ensured that ECC got home for the win, reaching our target for 6 wickets down in the 28th over. Thanks were expressed to our hosts for ensuring that we completed a full game by staying out in the field in very poor conditions.

Our final game was, as usual, at Amsterdam Cricket Club. A strong ACC top-order was pinned down by another solid ECC bowling display led by Sam Baker (12-3-34-2). Only their number 3 Khozaam reached 50 and, with time being used up to little effect by the ACC middle and lower-order, the ACC captain finally declared at 165-7. Against a very strong opening attack which included a 1st team quickie, it was the turn of the ECC top-order to struggle. When the ‘last hour’ was called ECC had reached just 52-4 at less than 3 runs per over. An excellent partnership of 53 between Robert (39) and Rob (16) steadied the innings but Ollie and Carl Mann came together with 47 still needed off just 38 balls with 4 wickets remaining. A swashbuckling innings by Ollie (41 not out) and dogged support by Carl (5 not out) saw ECC home in a dramatic finish, with Ollie pulling their quick bowler for consecutive boundaries in the final over, cheered on by both their teammates and the players of SGS and Blunham CC who had been playing on field 2. It was a stirring end to a fine tour.

The 2016 Tour was very enjoyable and was particularly satisfying given that we had failed to tour in 2015 and we were taking a smaller party than on previous tours. The commitment shown by all twelve tourists both on and off the field is very much appreciated; we continued our tradition of playing competitive friendly cricket in a fine spirit and sharing enjoyable social time with our Dutch hosts.

An interesting postscript…
Those flying back to Manchester with EasyJet on the final evening had a final twist on offer when they were piloted home to Manchester by one of our own members. If Joe Jnr had been so keen to be part of the 2016 Tour, all he had to do was ask.